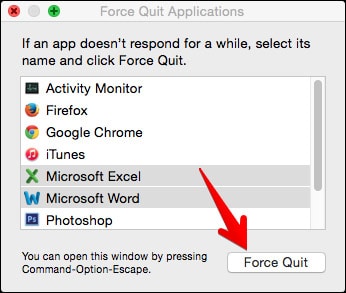 Force quit on Mac is done to close applications that are not responding, or unresponsive. Additionally, Force Quit on Mac OS X can also be implemented when problematic programs have stopped working properly, causing the computer to freeze. This article guide will offer several different methods how to force quit app on mac.

How to Force Quit App on Mac using Keyboard Shortcuts

You can choose to close an app usually by pressing a combination of keys. The Apple force quit keys are Command + Q key simultaneously. The force quit menu will pop-up. You can then choose from the app menu the application to Quit. If this doesn’t work, you can go for this option:

How to Force Quit App on Mac using Menu Bar

How to End an Unresponsive Process on Mac from Dock

The Dock Contextual Menu is another simple way that can be used to shut down unresponsive programs. The following instructions demonstrate how to end an application from the Dock:

How to Shut Down an App on Mac Using Terminal Commands

Note that with Force Quit you are not warned against intentions, and changes to an unsaved work may get lost. In addition to the methods just mentioned above, there are other ways which can be used to force quit apps running on a Mac. The most radical way you can shutdown an unresponsive app or window is to hold down the power button on your Mac until it shuts down. Once you are sure your Mac is off, you will have to press the button again to turn it on. Holding down the Mac power button will shut it off completely, not restart it. This is the worst-case scenario solution, and should be used only when you’ve tried all the other options.