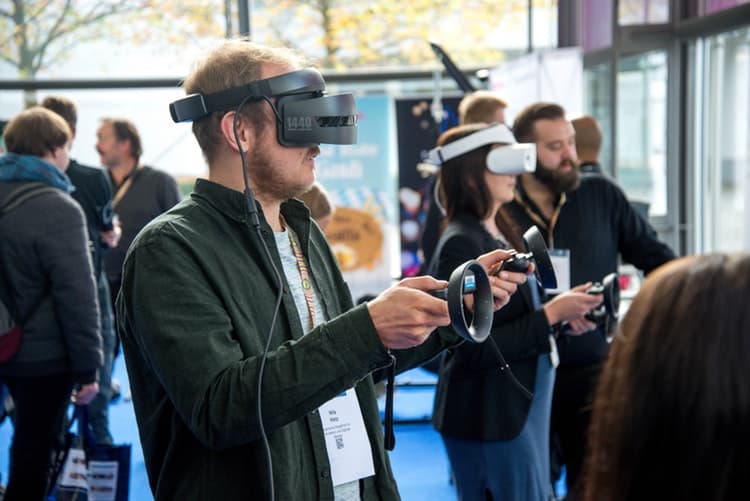 Since the moment video games first hit the marketplace, virtual reality gaming has been the dream of every hardcore gamer.

Arguably the desire to escape into made-up worlds goes back thousands of years, to the time humans first gathered around campfires and told each other stories.

Virtual reality has appeared many times in pop fiction. Remember the Holodeck from Star Trek or the training room in X-Men?

What exactly is it though? 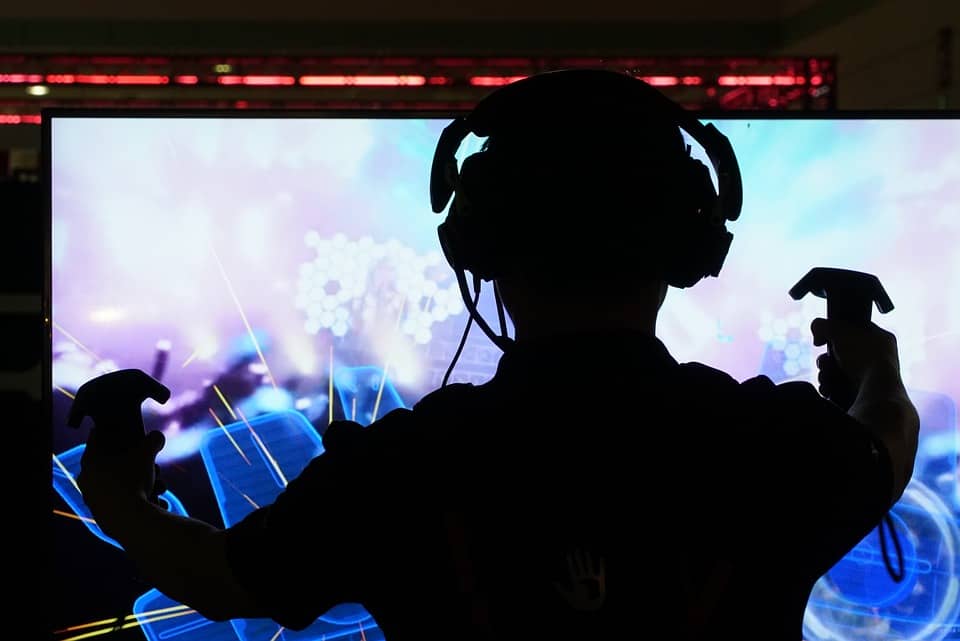 Simply put, virtual reality gaming allows a player to completely submerge themselves in a 3D environment. By wearing a headset with a screen in each eye, we shut ourselves off to our world and trick our brains into thinking we’ve entered a new one.

The goal of virtual reality gaming is to give the user as much immersion as possible.

Rotating chairs make the player feel as if they really are driving a race car or piloting a spaceship. Trackpads and omnidirectional treadmills let the user move around a 3D world by walking in place.

There are even gloves and suits that incorporate the sense of touch through vibrations. Imagine feeling the direction a nearby explosion came from in your left shoulder.

The term virtual reality was first coined in 1987. Primitive VR technologies had existed for many years before this, but it was only in the 1990s that they were finally used for gaming.

In the early 1990s, a company called Virtuality started producing the first virtual reality gaming machines. They were far too expensive for household use, but did manage to make their way into arcades.

For the first time, arcade goers could wear a low-resolution headset that allowed them to look around a 3D environment. They could sit in a cockpit with a wheel and feel like they were driving, or stand on an elevated platform and run around with a joystick shooting their friends.

Considering the first home consoles with any kind of 3D graphics did not appear until a few years later, this technology was awe-inspiring.

In the mid-90s both Sega and Nintendo attempted to bring virtual reality gaming into the household with affordable VR headsets. Unfortunately for Sega, they never succeeded in launching their product.

Nintendo’s Virtual Boy did not do much better. To cut down on production costs, they opted to use red LED lights instead of full-color screens. This meant that every game had to be played entirely in black and red.

Unsurprisingly, people were disappointed by this take on virtual reality. The small library of games was unengaging, and the ominous red lighting made people nocuous. Within less than a year the Nintendo Virtual Boy disappeared from store shelves.

While Virtuality style arcade machines were still developed, the technology remained stagnant for the next two decades.

Although new games were released periodically, they were generally forgettable and lacked innovation. People were more interested in high-end computers and gaming consoles.

The renaissance of virtual reality gaming

Fast forward to 2019 and virtual reality gaming is finally starting to make a comeback. With vastly improved graphics, better motion tracking, and a greater arsenal of accessories, VR is poised to take over the gaming industry.

Thanks to the internet making everything a whole lot easier, the development of VR is no longer limited to large companies. Small groups of individuals can get their projects funded through donations on websites like Kickstarter.

The competition for creating the best products is fierce, and that’s good news for gamers. 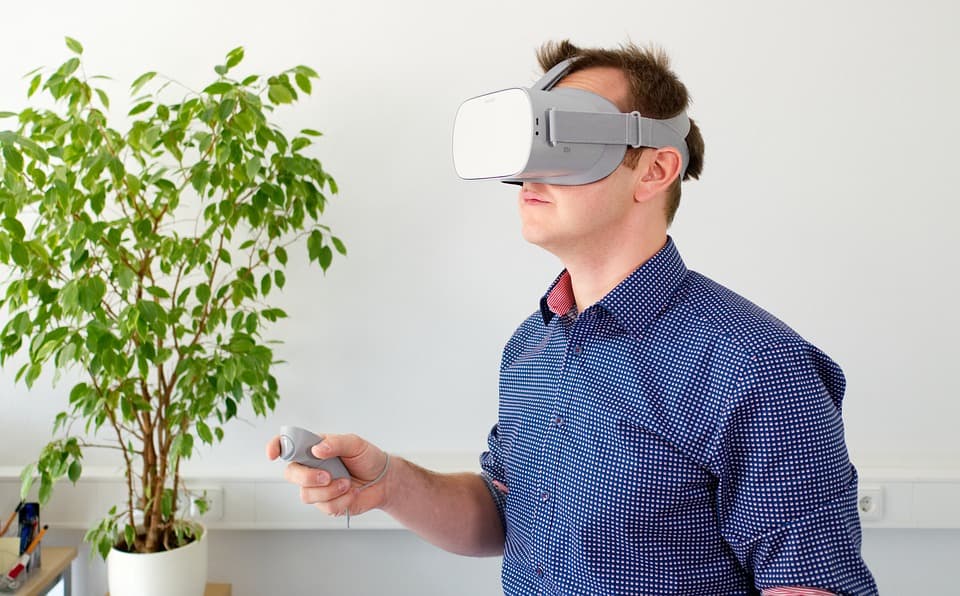 As we mentioned, virtual reality gaming is all about creating the most immersive environment possible. Modern VR achieves this through its headsets, motion-sensitive controllers, and optional accessories.

At the core of virtual reality gaming are the headsets, which work by projecting identical images into each eye. The brain puts these images together and believes that they are one consistent image.

This is called stereoscopic imagery, and it’s precisely the way your brain processes the real world. Each eye sees what it sees, and your mind fills in the blanks.

Another element of headsets is head tracking. The headsets use a combination of sophisticated technology to track where you position your head in relation to where it started. In this way, it knows which direction you’re looking.

Most games will require you to use at least one controller. Often you will need a controller for each hand.

Controllers contain motion tracking technology similar to smartphones and gaming controllers. Use them for aiming your cursor, moving your hands, swinging swords, and so on. This adds to the sense of immersion because your hands are entirely independent of your head movement.

For those of us without trackpads or treadmills, the controllers are also used to move around the game world with a joystick.

Finally, the controller has buttons necessary for performing certain actions.

There are a massive amount of accessories to choose from. We’ve already mentioned a few of them. Let’s look at them in more detail. Keep in mind that some of these are very expensive.

Trackpads are designed to let the user walk in place, rather than using a joystick to move around. Think of it as a giant laptop mouse for your feet. Some of them even have a ring that straps around your waist so it can tell if you are crouching or jumping.

Omnidirectional treadmills are a new version of trackpads that offer more grip and higher resistance. Therefore, they have the potential to be more immersive. Just as the name implies, they are circular treadmills that can move in any horizontal direction.

Rotating chairs are as they sound. But while some may only turn horizontally, others suspend the user in mid-air and will rotate in any direction. Some are more of a ball than a chair and require the user to turn themselves by moving their feet along the floor.

As we mentioned, gloves and suits can be used to add the sense of touch to your game with vibrations. But gloves serve the dual purpose of tracking your hands so that you can see them in-game.

Up until now, this technology has been mostly a gimmick. However, time is coming when players will be able to seamlessly pick up and place virtual objects within the game world. This will also be great for playing virtual instruments!

The Future of Gaming

The potential for ​future VR technologies is nearly endless. Controllers shaped like weapons; Gloves that apply heat when you touch something hot in-game; Large warehouses specifically for player versus player combat; 8k resolution headsets. These are just a few innovations coming our way.

Imagine when MMORPGs like World of Warcraft are playable in VR. Will you ever want to leave your house?

What You Need to Get Started 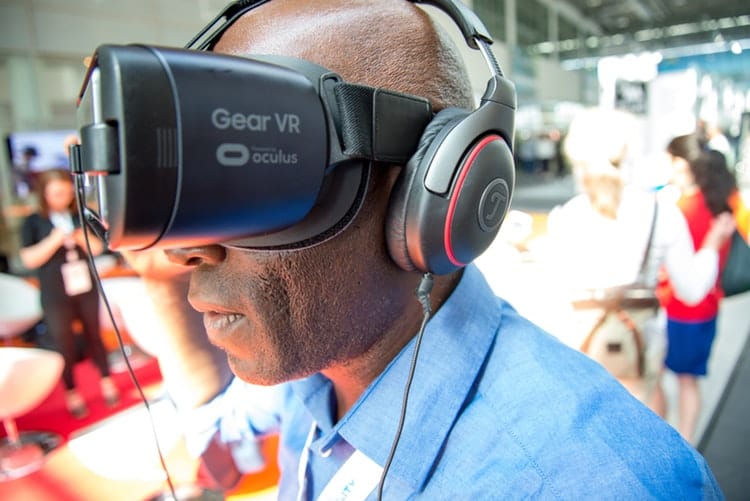 All you need to start gaming today is a headset and a device to use them. Although some headsets do not require an external device, such as the ​Oculus Go.

Which products you choose will depend on the games you want to play and how much you’re willing to spend.

If you own a PlayStation 4, no doubt you’ve heard of ​PlayStation VR. It offers easy setup and a decent ever-expanding library of games.

Maybe you’re more of a PC gamer, in which case you will want to investigate SteamVR. Keep in mind that you will need a reasonably powerful gaming PC. But there are a large variety of headsets to choose from

On the cheaper end of the spectrum is ​Samsung Gear VR, which allows you to turn your Samsung Galaxy phone into a VR headset.

We’ll leave you to decide which headset is right for you. 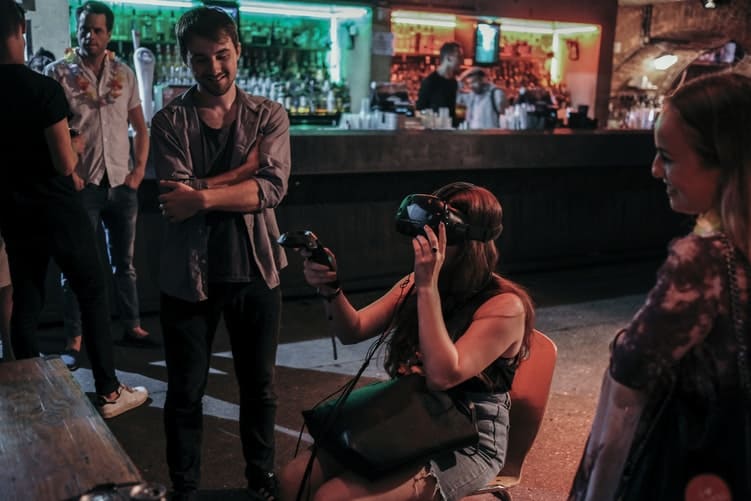 Perhaps the most significant drawback of VR gaming right now is a limited library of games. The list of high-quality games is even smaller. This is quickly changing, however.

2019 is the year that virtual reality gaming will finally take off. Already more than 30 new games have been announced, each of them featuring beautiful worlds and surprisingly unique game mechanics.

Meanwhile, there are still several games on the market worth your time. Here are just a few of the most popular games available.

​Bethesda is well known for its roleplaying games with vast and beautiful 3D worlds, countless missions and compelling characters. They also feature a high degree of character customization, which adds a lot to the replayability.

In ​The Elder Scrolls V: Skyrim VR, move around the medieval fantasy region of Skyrim using a controller, trackpad, or treadmill. Gaze in any direction by moving your head. With a controller in each hand, swing your sword, raise your shield to block, aim your bow and cast spells.

​Fallout 4 s also available for virtual reality gaming, but only on the PC. Gameplay mechanics are very similar to Skyrim, but with a post-apocalyptic wasteland setting with guns. The game also has unique features, such as the ability to build your own towns and defend them from raiders.

These two games alone contain hundreds of hours of gameplay.

​Beat Saber is one of my personal favorites and is available on the PlayStation and ​Steam stores. Remember Guitar Hero and Rockband? Well replace instruments with motion-controlled lightsabers, add a virtual 3D environment, and you have Beat Saber.

Hold a controller in each hand and see how the lightsabers move with them. Swing your sabers to the beat of the music and slice through blocks as they fly at you.

There’s a catch though; you can only hit blocks with the lightsaber of the same color. Certain blocks will have arrows on them indicating the direction you must slice them in.

Sometimes you will have to move your entire body to dodge incoming walls of energy. All these elements combine to get you dancing around like a ninja!

Beat Saber comes with a built-in library of songs, but you can also add your own or download ones that people have made from the Steam Workshop.

​Features include huge randomly generated worlds made from blocks, and the ability to collect those blocks using tools. Use the resources you’ve gathered to craft items and build up structures like Legos.

As with any first-person VR game, move through the world using a controller or any of the available accessories. Look around by tilting your head in any direction.

Minecraft does not support attacking with your sword through hand movement, so you will have to press a button for this. Of course, nothing is preventing you from swinging your arms around anyway if it makes you feel good.

In survival mode, you’ll explore dark and dangerous caverns, wander through forests and stroll across grasslands and deserts in search of resources to build your home.

In creative mode, you can fly around building whatever you’d like without the need to gather resources.

A major plus for Minecraft VR is that it’s also available in the Pocket Edition on Samsung VR.

Are You Ready to Game!? 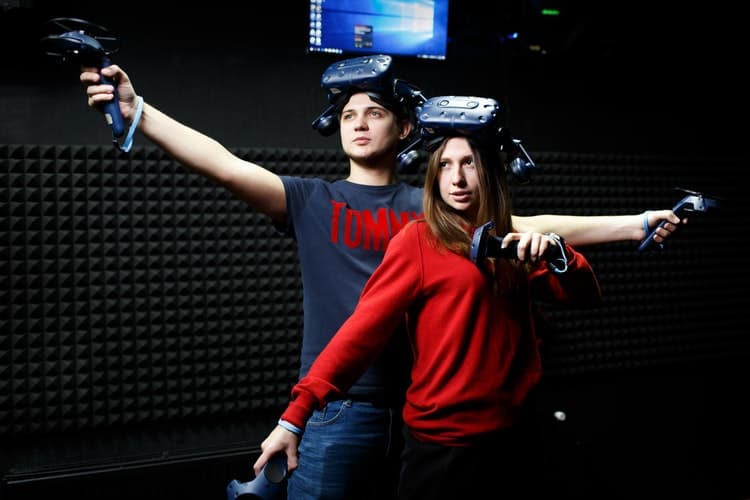 You should now have a basic overview of everything you need to know about virtual reality gaming. All that’s left is for you to get out there and make a decision about what to buy.

The number of choices can be intimidating, but luckily YouTube has plenty of product reviews and gameplay videos to browse.

Remember new headsets are likely to come out every year, so don’t feel like you have to go for the best of the best. Whatever you choose will bring you a brand new experience, and many hours of enjoyment.

Here’s a video to get you started.